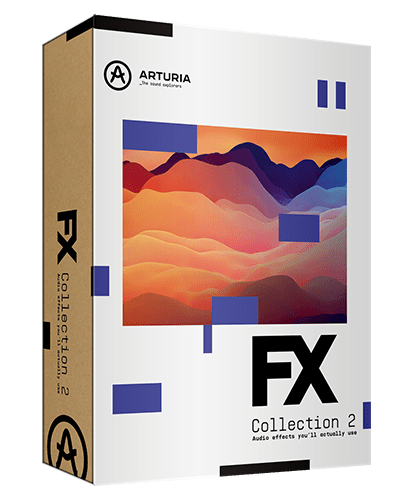 The 7 new modules included in Arturia FX Collection 2 are:

Additional features include a new preamp for the TAPE-201 Roland Galaxy tape delay emulation, improved tutorials built into the plugin, 200 new presets within a new preset browser, and compatibility with the NKS standard for inclusion in Native Instruments Komplete and Maschine eco system.

Arturia are not only well known for its analog hardware such as MicroBrute, MicroFreak, or recent PolyBrute. The company has also been using its TAE technology to great effect, creating convincing analog emulation of classic synths and samplers in its V Collection, recently update to version 8.

Since the release in 2020, the FX Collection has taken Arturia's expertise into the effect plug in world. The demos released sound enticing, and with a wider range of effects now included, this package offers a serious competition to the undisputed sheriff in town when it comes to effect emulations - Soundtoys*.

But which one is the better buy? Now I might be biased as an owner of Soundtoys Bundle. I feel Soundtoys has the edge over FX Collection 2, with a wider range of options, at a similar price. Having said that, each module in the Arturia FX Collection 2 is available as a demo (limited to 20 minutes and no loading/ saving). So if you want to add a bit of spice and character to your sounds, why not give the demos a try ?

Existing Customers: log in to get a personal offer which could be as low as €99